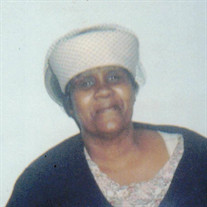 Mandy Faye Carter was born on May 02, 1951 in Catron, Missouri, to Eula May Spearman and Ray Carter Sr. Mandy and her family moved to St. Louis, Missouri at a young age. She met the love of her life, Robert James Pogue and they moved to California... View Obituary & Service Information

The family of Mandy Faye Carter created this page to make it easy for loved ones to share memories.

Send flowers to the Carter family.