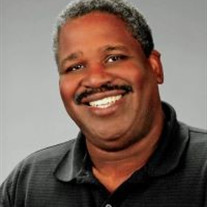 Obituary       Michael was born in Laurel, Mississippi, on February 13, 1960, but moved with his mother Catherine Eggleston, shortly thereafter to Saint Louis, MO., where he was raised by his mother and grandparents. He was raised in the Church and accepted Christ into his heart at an early age. Mike spent his formative years in Saint Louis, but later moved to California with his mother and stepfather, Spencer. Mike attended Gardena High School where he played football and track & field. During this time in his life, Mike formed unbreakable friendships with his school peers.      Michael comes from a large family which includes his younger sister, LaTrice, and plenty of Uncles, Aunts, Cousins and extended family. He was married for 15 years to his wife April, had two children Macahl (21), Ethan (15), a stepdaughter, Denise (24) and took legal custody of a another child, Kaitlynn (21) when she was 14 years old.  He loved his family very much and enjoyed attending family reunions, holidays, BBQ’s and random “get-togethers.” He talked to his mother often and deeply valued her opinions. Michael was a wonderful husband, father, son, friend, and co-worker.      In 1980, after graduating high school, Michael joined the Coast Guard and served 4 years of service before being honorably discharged. Michael attended El Camino College where he studied nursing. It was during this time that he found his true passion in computer technology and became highly knowledgeable about computers and other types of technology. The skills he attained and strong work ethic earned him several job opportunities. In 2017, Mike graduated from SNHU with a bachelor’s degree in General Studies and Information Systems Technology with honors. Michael worked for Torrance Memorial Medical Center for over 25 years and built a career he was very proud of.      Michael Anthony Gray passed away at Torrance Memorial Medical Center on July 28th 2020 at 10:58 am from complications from Covid-19 Virus. He was 60 years old. His wife April Gray was with him at his bed side. He is preceded in death by his grandmother, Lizzie Bell Gray Bonner; Grandfather, Samuel Gray; and step-grandfather, L. C. Bonner, and his uncle, Willie Ray Bonner.      To cherish his wonderful memory, he leaves behind his wife, April Gray; his children Denise Stevenson, Kaitlynn Payne, Macahl Gray, and Ethan Gray, all of Apple Valley, Ca.  His mother and stepfather Catherine and Spencer Eggleston of Highland, Ca; Sister LaTrice Swisher of Inglewood, Ca; Aunts Azerlean (Garland Sr.) Bethel of Fontana, Ca; Annie Calmese, of Highland, Ca; Gwen Adams of St. Louis, Mo; Uncles: Jimmy (Freda) Gray of St. Louis, Mo; Eddie Bonner of St. Louis, Mo; Alonzo Bonner of Los Angeles, Ca; Richard Bonner of Los Angeles, Ca; and Willie Bonner of Palm Springs, CA; and a host of loving in-laws, cousins, friends, and co-workers.   To send flowers to the family or plant a tree in memory of MICHAEL ANTHONY GRAY, please visit our floral store.

Obituary       Michael was born in Laurel, Mississippi, on February 13, 1960, but moved with his mother Catherine Eggleston, shortly thereafter to Saint Louis, MO., where he was raised by his mother and grandparents. He was raised in the Church... View Obituary & Service Information

The family of MICHAEL ANTHONY GRAY created this Life Tributes page to make it easy to share your memories.

Send flowers to the GRAY family.