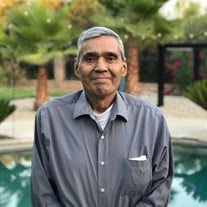 Obituary Juan Calderon Nielsen, 67, passed away peacefully on October 8, 2020 in Victorville, California. Survivors include his kids, Juan, Janet, David, Roger, Edgar, and 9 grandchildren, Juan, Nathan, Samantha, Emma, Natalie, Sean, Nicholas, Emily, David. Juan was born in Mexico on February 8, 1953. He was raised in Tecoman, Colima. From a young age he and his brothers all worked as Auto Mechanics. It was in Tecoman that he met and eventually married his wife, Ofelia, in 1976. A year later, their family started to grow until eventually they were a family of 7 living in Los Angeles, CA. Juan was a hard worker and instilled that ethic in his children. He knew cars inside and out and would always enjoy working on vehicles. He was also the kind of person that would 'tell it like it is'. He loved marascas, grilling carne asada on Sundays, and watching all the big boxing matches. To all who knew him, he was a charismatic generous man and a giving friend. His jokes and laughter will be missed immensely. May he Rest in Peace and forever reside in our hearts.      To send flowers to the family or plant a tree in memory of JUAN CALDERON NIELSEN SR., please visit our floral store.

The family of JUAN CALDERON NIELSEN SR. created this Life Tributes page to make it easy to share your memories.

Send flowers to the NIELSEN family.