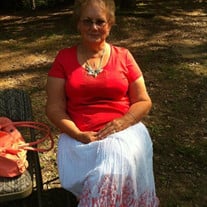 Obituary Jerry L. Williams, 72 of Heavener, OK went to be with the Lord on December 11, 2019 after a courageous battle of congestive heart failure and diabetes in Barstow, CA. Jerry was born on May 25, 1947 in Kennett, MO to Verlia and Bill Youngblood. While she was a young girl, her family moved out west to Wilmington, CA in the early 1950’s. She attended school there and graduated High School in 1965. She then attended a local Beauty College. She moved to California City, CA in the early 70’s and worked for the school district as a bus driver and lifeguarded in the summers. In 1978, she landed a laborer job with U.S. Borax and relocated to Boron, CA. She got promoted as the first “female” driver of the 90-ton dump trucks in the pit. (Her brother Billy was the load/shovel operator!) She worked in that position for several years and then transferred to the shipping & receiving dock. She met the man of her dreams, Leon Williams, in i983. She moved to Barstow, CA and got married on July 1, i984. She continued her career at Borax until 1992 and this is when she and her husband moved their lives to Walls, MS. They were very involved in their church, “Spirit of Life” in South Haven MS and Jerry worked as a CNA and also a tech in a local dialysis clinic for many years. In 2009, she and Leon decided on another big move to Heavener, OK for a change of pace and scenery. This is where they spent their summer months and continued to winter (snowbirds) in Barstow, CA year after year. Although Jerry never had children, she raised her cousin’s daughter, Carie Lee with love. Jerry was also involved with Leon’s kids, Benny and Debbie. She was a mother to many! She was the rock to the family for sure and kept in touch with even the most distant of relatives. A true woman of God and an Angel here on Earth. Jerry enjoyed doing everything with her best friend and husband! They traveled many places across our fine country in their motorhome and enjoyed camping with Yellow Freight family, cooking and spending time with family and friends. She loved flying with Leon in his airplanes and loved her doggies! And finding that perfect rummage/garage sale in search of that hidden treasure made her happy! Jerry is preceded in death by her parents, Bill & Verlia Youngblood, brother, Billy Youngblood, sister-in-law, NoraLee Youngblood, cousins Phyllis Jean Otten and Kenneth Dale Youngblood. She is also preceded in death by her father-in-law, Alvis Williams and brothers-in-law, LeRay and Charles Williams and by her Wisconsin & Illinois loved ones. She is survived by her husband of 35 years, Leon Williams, daughters, Carie Lee (Gregg) Ludel, Debbie (Tom) Dazzi, son Benny (Marcella) Williams, and many cousins, nieces, nephews, grandchildren and great-grandchildren. We were all so blessed to have known Jerry, she was the truest of souls and we will never forget how she touched and changed our lives forever. She’s the absolute definition of how life should be lived and the importance of God. The family would like to thank all of the doctors, nurses and first responders for everything done in Jerry’s care. Thank you to all the friends and family for your kindness, cards, wishes and prayers at this most difficult time.   Until we meet again...forever remembered and never forgotten. All our love.       To send flowers to the family or plant a tree in memory of JERRY L. WILLIAMS, please visit our floral store.

Obituary Jerry L. Williams, 72 of Heavener, OK went to be with the Lord on December 11, 2019 after a courageous battle of congestive heart failure and diabetes in Barstow, CA. Jerry was born on May 25, 1947 in Kennett, MO to Verlia and Bill... View Obituary & Service Information

The family of JERRY L. WILLIAMS created this Life Tributes page to make it easy to share your memories.

Obituary
Jerry L. Williams, 72 of Heavener, OK went to be with...

Send flowers to the WILLIAMS family.