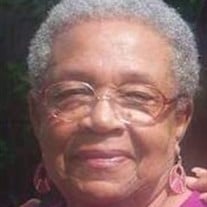 Obituary Eleanor was born to Roosevelt and Virginia Famber on December 5th, 1930 in Rome, Georgia. She was the youngest daughter of five, who preceded her in death. Eleanor married George Porter Terrell at the young age of 16 and from that union they had four children, Mildred, Brenda, George and James Lee. Years later she remarried James Thomas Frey who loved, embraced, and raised her children as his own. Together, they had one daughter, Zina. James and Eleanor were happily married for 49 years until the time of his death in 2007. During her lifetime Eleanor left a mark for her love of cooking delicious meals for her family and friends on any occasion, function, or request. She said her secret to cooking is to never rush, take your time and most of all, cook with love. Not only did she share a passion for cooking but what made her the coolest mother and grandmother ever was her passion for basketball and video games, specifically, Pac-Man. She was a die-hard Lakers fan and during the season you would find her in her favorite spot playing Pac-Man on one TV and the Lakers game on the other. She also played a mean game of cards.  For a short amount of time she worked for MAttel Toy Company but retired from Locke High School after approximately 5 years. Her job was to prepare and serve food to students and staff. She took pride in her work and loved feeding students and making sure that none went hungry. Throughout the years many would return to thank her for her kindness. She was always giving to others in need with a kind heart. She was a loving and wonderful wife, mother, grandmother, and aunt. Not only to her children, but was known as "Mama" to many. As a long-standing member of Greater Westside M.B.C. in Los Angeles, CA, she was known as "Sister Frey" under the leadership of Pastor Adrain Ceasar. She played a pivotal role in helping to establish the church in its early years.  Deciding they needed a change, she and her family moved to a new home in ADelanto, California. She was very happy with the new changes, but she really missed her church family, friends and the wonderful memories she left behind. She lived in her home until Zina's sudden death in 2012. In 2013, she moved to High Desert Villas in Victorville, CA amongst other seniors. There she met new neighbors who later became friends and some "family." One in particular, Susan, who she referred to as her daughter. Susan took wonderful care of her to the end. There were other "angels" God sent to help in the form of neighbors and friends, making her stay at High Desert Villas a happy one.  Eleanor was a matriarch who is survived by her four children, Mildred, Brenda, George (spouse Ann) and James Lee. Son-in-law, Donnell Evans, and "Alma Jean" Santos; Grandchildren, Staci (spouse Keith Sr.), JAmille (spouse Daniel), Damon, Alana, Jamye, Talina, Jordan (spouse Alexis), Matthew, Edwin, Lyric, Ladarrence; Great grandchildren; Stacia, Amara, Keith II, Damesha, Gabriel, Sheree, Deondre, and baby James Thomas (who preceded her in death) and a host of nieces, nephews, family, and friends.   To send flowers to the family or plant a tree in memory of ELEANOR - FREY, please visit our floral store.

Obituary Eleanor was born to Roosevelt and Virginia Famber on December 5th, 1930 in Rome, Georgia. She was the youngest daughter of five, who preceded her in death. Eleanor married George Porter Terrell at the young age of 16 and from that... View Obituary & Service Information

The family of ELEANOR - FREY created this Life Tributes page to make it easy to share your memories.

Eleanor was born to Roosevelt and Virginia Famber on...

Send flowers to the FREY family.