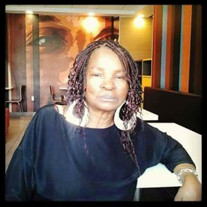 Obituary On November 21, 1950 in the city of Cullen, Louisiana; Delores Carter was born to the parents of C.C. and Elzadie Carter. Delores was the 6th out of 14 children. In the early 1950’s her parents relocated to Los Angeles, Ca to provide a better living for their children. She obtained her education in the public-school system of Los Angeles. Soon after, she had three sons; Broderick (deceased) Shannon Jefferson, Brandon Carter and one daughter; Lakisha. After having her children, she then met and married her soulmate Michael Edward Williams, and into this union was born three daughters; Amanda, Jerica, and Kristine Williams.   In the early 80’s Delores took a trade as a Certified Nurse Assistant (CNA), working as a CNA for over 20 years. Delores loved to dance and looked forward to the many gatherings that was given by her family and friends. Her appearance was top priority. She always had her hair done and dressed to impress; “Mama T was what they called her”. Delores loved her children unconditionally. She was very humble and giving; there was nothing in the world she wouldn’t do for her children and grandchildren.   On May 13th she gained her wings and went home to be with the lord. She proceeded in death her loving husband; Michael Edward Williams, her son Broderick, and daughter Lakisha. Her parents C.C. and Elzadie Carter. Seven brothers; C.C Carter Jr., James Arthur II, Styauno Carter, Terry Carter, Mark Carter, Kimbel Carter, Bradford and one baby girl. She leaves to cherish her children; two sons; Shannon Jefferson (Los Angeles, Ca) and Brandon Carter (Fontana, Ca). Three daughters; Amanda Williams (Rialto, Ca), Jerica Williams (Rialto, Ca), and Kristine Williams (Bakersfield, Ca). Her grandchildren; Kaliah, Heavin, Micheal, Melody, Devaughn, Ayamae, Jaylen, Jacob, Ven, Tori, Tyshawn, and Zaniah. Two great-grandchildren; Karyna and Indya. Two sisters; Patricia Carter (Los Angeles, Ca) Loretter Carter (Los Angeles, Ca). Three brothers; Ronnie Carter (Lake Elsinore, Ca), Greg Darwin Carter (Los Angeles, Ca), and Wade Carter (Los Angeles, Ca). Two sisters in laws; Rita Carter (Los Angeles, Ca) and Linda Carter (Lake Elsinore, Ca); and a host of nieces and nephews, family, and friends. She will be truly missed. To send flowers to the family or plant a tree in memory of DELORES CARTER WILLIAMS, please visit our floral store.

Obituary On November 21, 1950 in the city of Cullen, Louisiana; Delores Carter was born to the parents of C.C. and Elzadie Carter. Delores was the 6th out of 14 children. In the early 1950&#8217;s her parents relocated to Los Angeles, Ca to... View Obituary & Service Information

The family of DELORES CARTER WILLIAMS created this Life Tributes page to make it easy to share your memories.

Send flowers to the WILLIAMS family.