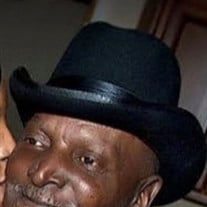 Obituary David Lee Haughton, 72, of Los Angeles CA, was called to the Lord May 24, 2020. He was born to the late Matthew and Bessie Haughton, July 12, 1947, Los Angeles CA at General Hospital. David attended George Washington High School in Los Angeles, CA. He married Johnetta Hilt September 30, 2000 in Las Vegas, NV, and they lived together in Dayton OH., before relocating to Victorville, CA in 2014. David gained two stepchildren with his union to Johnetta, Frank Smith (Pee Wee) and Cherill Hilt of Victorville, CA.   Throughout the years, David worked several jobs. The most memorable jobs were working for Borax as a Chemical Plant Forman and Silver Saddle as a contracted landscaper before retiring in Las Vegas, NV. Decency, reliability, honor, dignity and respect: these are all the qualities that David not only held in high esteem but practiced every day during his time with those he loved. He could never resist the opportunity to have a laugh with all those that was blessed to be in his life. His wife, daughter, siblings, grandchildren, nieces and nephews were the center of his whole world. David loved to dance, even though he was not very good at it. He always thought he was one of the members of the Temptations, mocking the dance moves and singing like David Ruffin. David was a diehard Denver Bronco fan and he made sure everyone knew about it. He got a kick out of calling his daughter and sister to brag about his team winning the Super Bowl, because our teams weren’t as great as his. David was survived by his daughter, Raquel Haughton-Major (Thomas Major III), of Youngsville, NC. He was survived by his sister Rochell Haughton Burton; proceeded in death of two other siblings Rosetta Martin and Michael Haughton. Grandchildren; Maliyah Milligan, Malaysia Lundy and Makayla Lundy; nieces Paula Burton, Rondalynn Jackson; nephew Malachi Patterson, proceeded in death nephew Eric Burton. David leaves behind a host of cousins and many close friends. To send flowers to the family or plant a tree in memory of DAVID LEE HAUGHTON, please visit our floral store.

The family of DAVID LEE HAUGHTON created this Life Tributes page to make it easy to share your memories.

Send flowers to the HAUGHTON family.