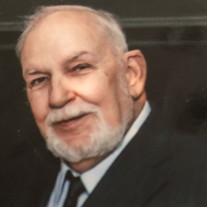 Obituary Cecil LeRoy Heath, age 76, passed away Friday, May 15, 2020 due to complications with cancer at Kaiser Hospital in Ontario, California with his wife and loved ones by his side. Cecil lived with a prostate cancer diagnosis for the past 17 years, and did so with grace and dignity, showing more concern for those around him than himself. Born December 15, 1943 to John Daniel Heath and Mina Belle Yocom in Orlando, Florida. He was raised by his mother, a teacher and nurse, who took in his cousin, Bonnie at a young age. Bonnie and Cecil grew up together like siblings, they were inseparable and spent their childhood in Orlando, Florida. At the age of 17, Cecil moved to California and enlisted into the United States Navy, and he proudly served 9 years while traveling the world. He was fortunate to travel and visit multiple countries to name a few: England, France, Spain, Italy, Germany, Scotland and Japan. Cecil's life changed forever when he met Andria Elizabeth Parent. Andria recounts the first time they met at the HoneyMooner in Long Beach, California. She went to visit her friend Sue that night, she worked there as a bartender. Cecil was there that night, and called her friend Sue over and said, "I want to buy her a drink (Cuba Libre in a chimney glass- Andria's favorite drink) call me over when you give it to her and introduce me." In November of 1968 they were engaged and married on July 19, 1969. Both were blessed with Eva Marie Heath (Cecil's daughter from his previous marriage) born November 8, 1967. Cecil and Andria were blessed again with their first born, Shawn, on August 21, 1979. Then blessed again with their second born, Cassandra, on August 8, 1984. Cecil later became a grandfather on May 31, 1991 with Michelle then again with Tamara on September 3, 1992. Most recently, Cecil became a great grandfather to Sarah on April 20, 2020. After completion of Cecil's service in the Navy,he went to work for the Long Beach Naval Shipyard in Long Beach, California as a Ordinance/Elevator Mechanic and did so for the next 20 plus years. During his time there, he was known as the Joker, he loved to tell jokes and make others laugh. Following the closure of the Long Beach Naval Shipyard in 1997, Cecil transferred to the US Marine Corps Logistic base located in Barstow, California where he worked as an Artillery/Ordnance Inspector for 20 years. He was well respected by his colleagues throughout the years and then in February of 2017 he retired.  Cecil was a gracious gentleman, kind and loving that made everyone feel at home. In Cecil's downtime, he loved engaging in some of his favorite pastimes, playing cards, gambling, playing pool and darts. Cecil had so much love for the game of football, he was an avid professional football fan especially for the Miami Dolphins or any Florida team. Cecil also had a wonderful singing voice and shared it with his wife and family; often singing together throughout the years at their favorite karaoke joints, parties and various gatherings. He was a very hard worker and quite the handyman, he helped his wife by fixing and building many things throughout the years, along with doing work for family and friends.  As we grieve the loss of Cecil, we also celebrate his life and remember and cherish all the wonderful memories and good times shared. Cecil will be dearly missed by his wife, Andria of 51 years, and children, Eva, Shawn and Cassandra; Grandchildren, Michelle, Tamara; Great Grandchild, Sarah; Nephews:Michael, Tony, Matthew, Chad, Scott, Matthew II; Nieces, Danielle, Kaila, Kendra, Maddison; Brother-in-laws, Craig, Gary, Scott Sr., Jimmy; sister in laws, Ericka, Chris; Daughter-In-Law, Teresa; Son-in-law, Jon, Ben, Michael; Niece-in-laws, Yuli, Silvia and Nadiyah, and by all his family and friends.    To send flowers to the family or plant a tree in memory of CECIL LEROY HEATH, please visit our floral store.

Obituary Cecil LeRoy Heath, age 76, passed away Friday, May 15, 2020 due to complications with cancer at Kaiser Hospital in Ontario, California with his wife and loved ones by his side. Cecil lived with a prostate cancer diagnosis for the past... View Obituary & Service Information

The family of CECIL LEROY HEATH created this Life Tributes page to make it easy to share your memories.

Send flowers to the HEATH family.