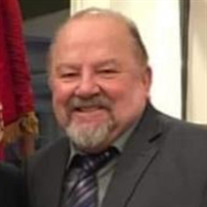 Brian Francis Oberg of Apple Valley, California passed away on December 9th, 2021 at age 73 of heart complications. Born in Long Beach, California on March 29th,1948 to delighted parents Dorthea & Arnold Oberg, Brian was the youngest of four siblings. He was affectionately nicknamed "Corky" by his family. After graduating high school, Brian proudly joined the United States Marine Corps. (Sergeant Brian F. Oberg USMC Dispersing Agent 1968-1971 Vietnam 1970-1971) Brian loved his country and everything it stands for. He went on to instill this love of country in his family. After serving in the Marines, he met his future wife, and love of his life, Angela Reichert. They wed in a small ceremony in his sister Beverly's backyard on July 19th, 1975. They had just celebrated their 46th anniversary this year. Brian & Angela went on to have three children; Melanie, Brian, and Alexander. Brian & Angela owned an office equipment business & worked hard to provide for their family. Later in life Brian went on to work in Real Estate and then auto repair management before retiring to join Angela in becoming their son Alex's full time caregivers, when he was struck with a major illness. Brian was extremely dedicated to his son Alex, and was honored to provide his care. Brian was a fun-loving person who was passionate about classic cars and music from the 50's & 60's. He owned many hot rods throughout his life, eventually building his most prized classic car, a 1964 Comet Cyclone he rescued from a junk yard and fully restored. It was special to Brian because it was same make and model he drove as a teenager. You'd often find Brian in the garage tinkering with his cars and singing along to 60's or doo-wop tunes. Brian loved car shows, and belonged to a local car club, the "Over The Hill Gang" where he enjoyed meeting up with his fellow classic car enthusiasts. Brian approached life with a "glass half full" attitude and a charitable heart. He was always one to lend a hand to anyone in need. You'd often see him quietly buying a meal for those less fortunate, helping someone with a broken down car, opening up his hot wheels collection to his grandkids, or striking up a conversation with a fellow veteran. He was a friend to many and loved by all. Brian is survived by his tear-filled family; his wife Angela; Daughter Melanie and her two sons Trevor and Riley; Son Brian, his wife Jennifer, and their five children, Layla, Scotty, Gracie, Matthew and Gunner; Brother Richard, his wife Marcy and daughter Linda; Sister Beverly, her son Craig and his wife Jennifer; Her son Brent, his wife Kim, and their children Greyson & Keira. Brian is preceded in death by his parents Dorothea and Arnold Oberg, his oldest brother Douglas Oberg, and his beloved son, Alexander Oberg. Brian was an extremely devoted family man and spent every single day of his honorable life dedicated to his wife, children, and grandchildren. His joyful & generous spirit will be incredibly missed by all who were honored to be a part of his extraordinary life. A funeral with military honors will be held at Riverside National Cemetery on March 23rd, 2022 at 11 am, with a reception following at the Oberg Family Home. Everyone is welcome to attend and celebrate Brian's life. In lieu of flowers, the family respectfully requests donations be made in Brian's name to the Wounded Warrior Project.

The family of BRIAN OBERG created this page to make it easy for family and friends to share memories of BRIAN and pay tribute to his memory.

Brian Francis Oberg of Apple Valley, California passed away on...

Send flowers to the OBERG family.