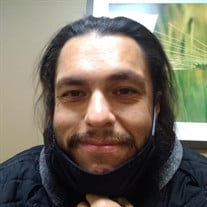 Albert "Andrew" Franco, son of Sylvia Torrez and Michael Franco, has passed away on the 1st of January, 2021 in his hometown of Barstow, California. He was 37. Andrew spent his life being a devoted father, loving husband, a dependable son and brother, but most of all, he was known for his kindness and sense of humor; leaving a lasting impression on everyone he met. Andrew preferred to live a simplistic, but full and joyful life despite having Renal Disease (ESRD) and other numerous medical issues that he battled with daily. Through these circumstances he was able to dive deeper within his own thought process and get to know what he referred to as his true inner-self, giving him the added strength to find joy and love in even the worst of days. He believed in truth and freedom of Will over any medical diagnosis he was given; putting mind over matter and defying medical expectations. He enjoyed working on cars, being outdoors, going on spontaneous road trips where he would shout, "Adventure!", with his family as everyone buckled in. He also loved talking in movie quotes, the number 13, playfully arguing with anyone he could challenge (he should have been a lawyer), and singing the entire soundtrack to the film, The Nightmare Before Christmas- at random. Andrew always thought of himself as "Family Size" and even got it tattooed on his arm by his wife. He received his formal education from Universal Technical Institute, where he obtained professional degrees as a Ford Master Technician and mechanical engineer. He went on to be a machinist for 7 years at Vista Metals Corp., a job he loved. On his breaks he would sneak scrap metal and design little figures that he would bring home and gift to fellow patients and nurses at dialysis. Andrew is survived by his wife, Amber Franco; daughter, Alexa Franco (mother, Rosanna Chavez); mother, Sylvia Torrez; brothers, Orlando Lobato, Dominique (Liz) Winston, John Lucero, and Michael Franco; sisters, Venessa Griego-Lobato and Amy Gonzales; as well as many nieces, nephews and cousins. He is joining his father, Michael Franco; grandparents Trinidad & Ernestina Franco and Agustin & Leonor Torrez. Services will be held February 24th at St Joseph Catholic Church in Barstow, CA at 10:30am.

Albert "Andrew" Franco, son of Sylvia Torrez and Michael Franco, has passed away on the 1st of January, 2021 in his hometown of Barstow, California. He was 37. Andrew spent his life being a devoted father, loving husband, a dependable son and... View Obituary & Service Information

The family of ALBERT FRANCO created this Life Tributes page to make it easy to share your memories.

Send flowers to the FRANCO family.